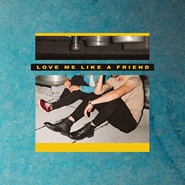 立即播放
分享到：
Fly By Midnight专辑介绍：NYC-based retro pop duo, Fly By Midnight, ​are back with their latest alt-groove inspired single “Love Me Like A Friend” off their upcoming sophomore full length. Following a year of sold out album shows in NY/LA and festival appearances at Firefly & Panorama, the guys have built a mass following on their YouTube channel with over 250,000 subscribers. Previous singles such as “Lovely” & “You Belong” both premiered at #1 on Apple Music’s Pop Hot Tracks, as well as Spotify’s New Music Friday US, UK, Japan & Sweden.
“Love Me Like A Friend” co-written with Derek Fuhrrman (Goo Goo Dolls, Phillip Phillips) illustrates the duo’s continued ability to mature their sound. “Love Me Like A Friend really unlocked a more organic side to the album as a whole. Conceptually it’s quite sad.. which makes the uplifting drive all the more enjoyable,” says Justin. “After writing it in LA with Derek we knew it would be a single. It’s been such a fun track to bring to life. We hope fans have just as much fun listening,” Slavo adds.
详细
下载高品质MP3
全选 反选 播放选中歌曲
更多
添加选中歌曲到歌单将选中歌曲制作成虾米播播
下载选中歌曲