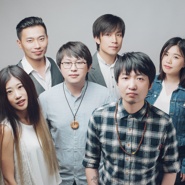 
Two years ago, several friends decided to start a band and enjoyed unlimited musical enjoyment with limited time.
Two years ago today, their new singles "spring breeze ten li" raising funds in public on the line, officially established.
They are looking forward to having the opportunity to make an album and make a tour in the future,but they don't know when they can achieve it
Two years later, they met with thousands of listeners and finally made their album and went on a tour. We were given too much.
Two years later today, they published a song which will be given to those who are always with us, and to everyone.
Mr.Elk is two years old, so at this time, at the moment, we have to say "Thanks "out loudly
"I would like to travel half a world towards you, for the very beginning where we start our story."
What will the next two year be doesn't really matter. It is the time you and me share that deserves to be cherished..
- The song for everyone